Talk to a Professional

If managing your finances has become overwhelming, find out how to take back control with one of our personal debt solutions. Our products are tailored to your circumstances and what’s best for your financial future.

Debt Management Plans can help you take back control of your finances by reducing your overall outstanding debt, pausing interest, and stopping those harassing calls and emails from creditors.

Combine your debts and take back control with a debt consolidation loan. Roll all of your personal debts such as credit cards and personal loans into one, easy-to-manage repayment.

Take back control of your financial future and start fresh by declaring Bankruptcy, eliminating your debts through our Registered Bankruptcy Trustee.

You may be eligible to refinance your home loan, allowing you to consolidate your credit card debts and personal loans, reducing fees, and alleviating stress. A great way to take back control of your financial future.

If you find it difficult to manage your debts, we can help you take back control with our budgeting services, tips, and tools. Build a positive financial future, starting today.

In today’s economic climate, as a company director, you know when your business is in trouble. We’ll give you the options available to take back control of your finances and make decisions about your business. Start with our free 30-minute consultation today.

Shift the control of an insolvent company to an administrator, providing breathing space from creditors and helping directors avoid insolvent trading, and potential liquidation.

Give your company a chance to take back control by implementing a turnaround strategy, such as restructuring. Challenging economic climates can make your financial future uncertain, reaching out early can help you take back control today and save your business.

If your company cannot pay off its debts, it may be declared insolvent. Directors and shareholders may decide to wind it up, and a Liquidation can help you get the best return out of what's left to secure your financial future.

We can help you manage accumulating tax debt, negotiate with the ATO on your behalf and offer support with finance for tax debt loans. We provide all the necessary information on what to do if the ATO takes action against your company, allowing you to take back control of your financial future.

You may be eligible to refinance your home loan or find a new lending solution, allowing you to consolidate your debts, reduce fees, and alleviate stress. A great way to take back control of your financial future.

We’ve been helping Australians take back control of their financial futures since 2005. With a large range of debt solutions, a dedicated team, and market leading digital tools and technology, we are paving the way in providing financial wellbeing for all Australians struggling with debt.

We don’t stop at debt, with our company embedded in the local community we support local sporting teams and charities through sponsorships and events. Get involved today.

We are a national company, with a Head Office in Noosa, who want to give Australians a fresh start to a positive financial future. Our team are close-knit, dedicated, and passionate about helping Australians and each other. Apply here today!

We have helped thousands of Australians take back control of their financial future whilst being non-judgemental, caring, and honest. But don’t just take our word for it, hear it from the customers themselves.

Debt and financial worries can be overwhelming and have a significant impact on your life. It’s important to us that you aren’t alone during this journey. While we focus on your financial future, our wellbeing partners focus on you.

Knowledge is power, so we’ve put together a collection of calculators, content and tools that make understanding your finances easier, so you can take back control today. From budgeting or debt consolidation calculators, to FAQs, Articles and Educational Videos, we’ve got you covered.

If you’ve got a question, we’ll give you an answer. Find our most common questions and answers here, all designed to help you take back control of your financial future now.

We’re all about providing Australians with the latest information and assistance to help you take back control. Find hundreds of our articles here, covering topics such as Debt Agreements, Bankruptcy, Budgeting, Director Advice, Education, News, Research and much more.

Our custom calculators do the hard work for you, so you can see how easy it is to take back control of your financial future today. From loan repayments to budgeting, business loans to credit card debt, we’ll crunch the numbers for you.

If you can’t find the answers here, it’s time to get in touch! We’re real, ready, and have the answers you need to secure your financial future. Let our dedicated, caring, and non-judgemental team help you take back control today.

See how our unique insolvency solutions and accredited team can enhance your service offering and assist you to retain customers. Combining over 45 years of experience, we work with a network of business professionals to assist customers through difficult financial situations.

A legitimate restructure option to avoid being accused of phoenix activity

If a company fails and is placed into Liquidation or Administration, suddenly, there may be another company with a very similar name that starts trading, providing similar (or even the same) goods and services.

Is this fraudulent phoenix activity?

Unfortunately there’s no definitive answer, because there’s a big difference between fraudulent phoenix activity to avoid tax and other liabilities, and a business genuinely resurrecting itself using a new corporate structure.

What is illegal phoenix activity?

“We define fraudulent phoenix activity as the evasion of tax and or superannuation guarantee liabilities through the deliberate, systematic and sometimes cyclic liquidation of related corporate trading entities”.

“Phoenix activity involves the systematic act of transferring assets from an indebted company that has or will be wound up, into a new corporate structure that has the same directors or company officers. As a consequence of this conduct, the directors or company officers avoid paying outstanding liabilities owed to creditors, employees and statutory bodies incurred by the company that has been wound up, while continuing the same or similar business activities using the newly established company.”

As liquidators, we often need to determine whether fraudulent phoenix activity has taken place. so we use both definitions, along with these key indicators: 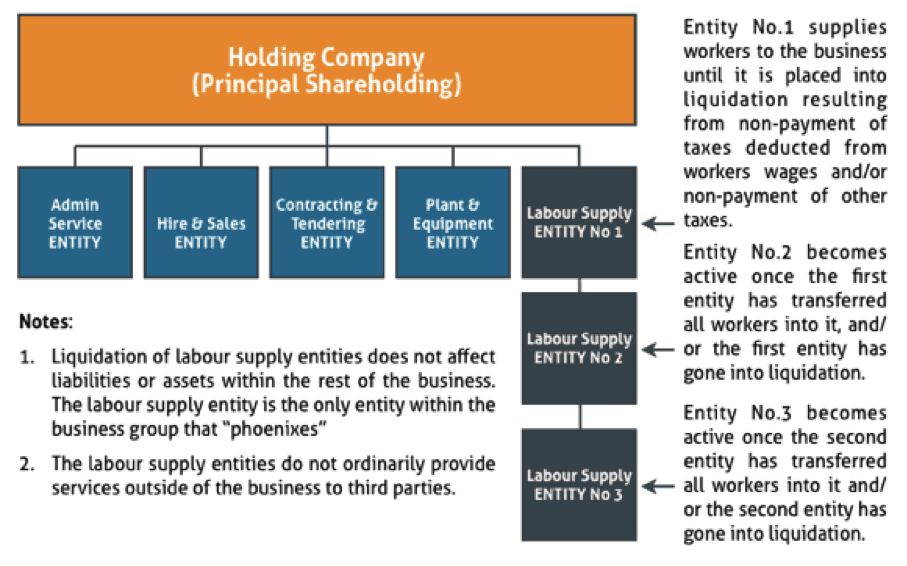 A large labour hire business with minimal or no assets intentionally structures its operations across a web of related companies. The group’s assets are held in different entities, with no commercial agreement between the employing entity and the other entities within the group.

The group has intentionally left behind unpaid taxes, superannuation and workers compensation debt. So in this case, it’s fraudulent phoenix activity.

Now, here’s an example of the corporate form being used legitimately to restructure an insolvent company or business.

Mr Hard Worker, Director of I’m A Hard Worker Pty Ltd (“the Company”), becomes aware it can no longer pay its debts (it’s insolvent). Mr Hard Worker consults his advisor and they seek advice from a Liquidator about the Company’s solvency and potential options.

The Liquidators outline all options and risks associated with the Company’s insolvency, and Mr Hard Worker decides to place the Company into liquidation.

The Liquidators gets an independent valuation of the Company’s assets, and Mr Hard Worker arranges to purchase some from the Liquidator at market price. Mr Hard Worker then sets up a similar business using another company where he is also a Director.

The Liquidator pays the creditors on a pro-rata basis using the money they get from selling the assets. Unfortunately there’s only enough to pay the company’s outstanding creditors a dividend of 50 cents in the dollar.

This is just one example of using the corporate legislation legitimately to restructure an insolvent entity. Every situation is different, so they need to be considered case by case.

Related parties can’t offset prior debt against the purchase of the assets. A liquidator has the power to challenge:

Any new structure must be profitable and comply with all its statutory obligations. Is the new venture really feasible? Do you have a business plan, cashflow and budgets?

You may need suppor from secured creditors (e.g. banks and other financiers) in a restructure that could include transferring facilities to a new entity. When considering a restructuring plan, you and your advisors to communicate openly and honestly with your financiers.

A party with a security interest in the whole (or a substantial part) of a company’s property has the right to appoint an administrator or receiver over the company’s assets.

Consider the wider public perception of an insolvency appointment or turnaround plan on creditors, suppliers, employees and customers.

The Corporation Act imposes duties on Directors (including de facto and shadow Directors) including:

They also have a duty to prevent insolvent trading. When considering a restructure, you need keep your duties in mind as you make your decisions.

Any Director involved with two or more corporations that failed due to poor management within seven years can be disqualified from managing corporations for up to 10 years.

Section 588G of the Act imposes liability on a company’s Director who allows the company to incur a debt when:

(A company is insolvent if it can’t pay its debts as they fall due.)

The DPN regime was amended on 29 June 2012 to reduce the scope for companies to engage in fraudulent phoenix activity. The DPN regime now:

Most contracts and leases contain insolvency clauses (or Ipso Facto clauses) that state the contract is automatically terminated in the event of insolvency.

If you’d like to confidentially discuss any of your clients’ situations regarding current or potential insolvency, get in touch and we’ll make a time to step you through the options and our process.

How Can We Assist You Today?

Other
Please select at least one type of unsecured debt.

Some of your details appear incorrect.
Please update the highlighted fields and re-submit.